The emblematic Casa Saladrigas, located just 15 minutes from the Hotel Pimar & Spa, opens this month one of the events that has already made a dent in the cultural agenda of Blanes and that never ceases to surprise for its attractive, original and breaker.

This is the exhibition Young Talents V.5, the fifth consecutive edition of an initiative, which aims to give greater visibility to the new emerging values ​​in visual arts of the city of Blanes.

In the line of the four previous editions, the Culture Department of the City of Blanes has sought to have a variety of artists, both for the topics they deal with and for the material with which they work. In this way, four young people representing the world of painting and mandalas have been invited through two boys and two girls.

These are Anna Tordera, Pol Peiró, Estefania Garcia and Joel Ristol, who will exhibit their creations at Casa Saladrigas until next May 27.

The schedule to visit the exhibition Young is: from Tuesday to Saturday, from 10 a.m. to 1 p.m., and from Thursday to Saturday from 5 p.m. to 8 p.m. Sundays and Mondays the room will be closed. 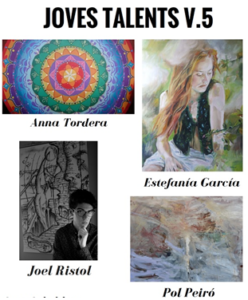